Every year the Academy honours the work of Australia’s leading scientists with election to its Fellowship. The Academy promotes science through education, public awareness, policy and international initiatives.

Professor Rossjohn, who is an NHMRC Australia Fellow from the Department of Biochemistry and Molecular Biology, was elected for his research into the structural basis for T-cell recognition of foreign antigens, which has had a profound impact on our understanding of autoimmunity and drug and food hypersensitivities.

“It is very humbling for my research to be recognised in this manner,” Professor Rossjohn said.

“This recognition arises from the findings that my collaborators, researchers and I have made in the field of T-cell immunology. Such findings would not have been possible without the support of the Australian Research Council, National Health and Medical Research Council and the Cancer Council Victoria.”

“Moreover, the long standing encouragement and support of Monash University, who have provided an outstanding environment for my team and me, has been a key factor in being able to undertake high profile science.”

As a member of the team that was recently awarded funding to establish the ARC Centre of Excellence in Advanced Molecular Imaging, Professor Rossjohn said he is poised to undertake new lines of investigation in the field of immune recognition at Monash.

“Access to major national infrastructure, such as the Australian Synchrotron, has also been crucial for us to maintain a competitive edge internationally,” Professor Rossjohn said.

Another Australian Academy of Science Fellow from Monash University is Professor John Bowman, a plant geneticist at the School of Biological Sciences. He was recognised for his highly original discoveries that have revealed the genetic basis of three fundamental processes in plant development.

Professors Rossjohn and Bowman will be admitted as Fellows at Science in the Shine Dome, the Academy’s annual celebration in Canberra in May, where the 21 newly elected scientists will also present summaries of their research achievements.

Professors Rossjohn and Bowman join other research lumunaries from Monash University who have recently been elected Fellows of the Academy. They include: Professors Doug MacFarlane (2007), Charles Mackay (2009), Trevor Lithgow (2010), Joe Monaghan (2011), Bryan Williams (2013) and Yuri Estrin (2013). 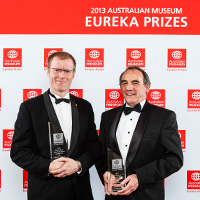 Last night at a gala event in Sydney, Australia Museum Eureka prizes were awarded for outstanding achievements in research and innovation, teaching, leadership, communication and journalism.

The team uncovered what activates a widespread, but, until recently, mysterious gut-dwelling immune cell. They noticed that a protein from these cells only formed properly in the presence of by-products of vitamin B, which are formed by invasive bacteria and yeast. It became clear that these vitamin B metabolites were providing early warning to our immune system.

This discovery will improve our understanding of the interplay between gut bacteria and the immune system, infections from thrush to TB, and open up opportunities for vaccine development and other therapeutics.