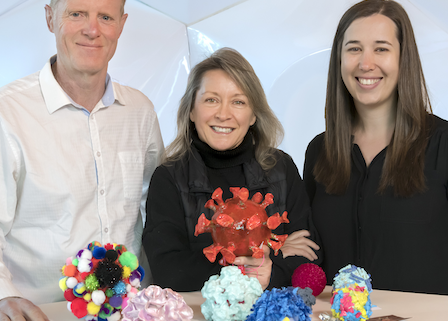 ARC Laureate Fellow, Professor Jamie Rossjohn, and his team are finalists for the Department of Industry, Innovation and Science Eureka Prize for STEM Inclusion. The team, including Dr Gabby Watson and Dr Erica Tandori from the Monash BDI and Dr David Jacques from the University of New South Wales (UNSW), developed an innovative program that aims to engage members of the blind and low vision community with science.

Often when science is conveyed to the public, the audience is assumed to be able-bodied. Members of the community with disabilities are frequently overlooked when the method to communicate the scientific discovery is not specifically tailored to their needs. A prime example is the blind and low vision community of more than half a million Australians.

Conceiving the idea for the Sensory Scientific Exhibition and Discovery Day, Professor Rossjohn joined forces with project leader Dr Watson, and legally-blind artist-in-residence Dr Tandori, who transformed scientific concepts into tactile models and artistic displays that were specifically tailored to this community.

“As the artist working with this amazing team, I can open up a world of scientific discovery to the low vision and blind communities – finally, we can all be part of the wonder of science, and share  this  in a way that is accessible to everybody,” Dr Tandori said.

Following the overwhelmingly positive feedback from the first exhibition held at Monash in May 2018, the team engaged with Dr Jacques at UNSW, who spearheaded the second Sensory Scientific Exhibition held in Sydney in December the same year.

The winners will be announced on Wednesday 28 August at Sydney Town Hall. For more information on the Eureka Prize, visit the Australian Museum website.