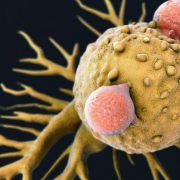 Researchers at Cardiff University have discovered a new type of killer T-cell that offers hope of a “one-size-fits-all” cancer therapy.

T-cell therapies for cancer – where immune cells are removed, modified and returned to the patient’s blood to seek and destroy cancer cells – are the latest paradigm in cancer treatments.

The most widely-used therapy, known as CAR-T, is personalised to each patient but targets only a few types of cancers and has not been successful for solid tumours, which make up the vast majority of cancers.

This TCR recognises a molecule present on the surface of a wide range of cancer cells as well as in many of the body’s normal cells but, remarkably, is able to distinguish between healthy cells and cancerous ones, killing only the latter.

How does this new TCR work?

Conventional T-cells scan the surface of other cells to find anomalies and eliminate cancerous cells – which express abnormal proteins – but ignore cells that contain only “normal” proteins.

HLA varies widely between individuals, which has previously prevented scientists from creating a single T-cell-based treatment that targets most cancers in all people.

But the Cardiff study, published today in Nature Immunology, describes a unique TCR that can recognise many types of cancer via a single HLA-like molecule called MR1.

Unlike HLA, MR1 does not vary in the human population – meaning it is a hugely attractive new target for immunotherapies.

Our recent coeliac disease research featured in the Age