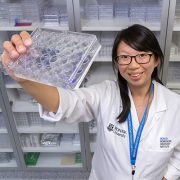 Could people living with coeliac disease one day be able to have their cake... Scroll to top