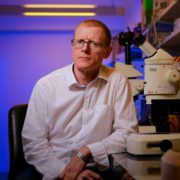 For more information about the 2018 ASBMB Lemberg Medal, see https://www.asbmb.org.au/awards/jamie-rossjohn/

Could people living with coeliac disease one day be able to have their cake...