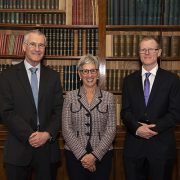 The Research Medal recognises peak research career achievements and outstanding leadership in research by scientists working in the State of Victoria.

Professor Rossjohn’s research is centred on understanding immunity – how it can be attuned to more effectively address diseases like the various forms of cancer, or potentially “switched off” to provide relief from allergies or the rejection of implants and transplants.

Professor Rossjohn was presented his Medal by Her Excellency, the Honourable Linda Dessau AC, Governor of Victoria, last night at the Royal Society of Victoria. He then gave a short talk on his field of enquiry.

RSV President David Zerman emphasised that the Medal is not just about discovery and innovation, but also about fostering and supporting a thriving research community and workforce to achieve collective impact.

“Some of this is demonstrated through a scholar’s personal output of journal articles and the related citations, or through patents and commercialisation, but it is also the research ecosystem that a leader supports through mentorship, collaboration and public engagement,” Mr Zerman said.

“We look very favourably on research leaders who bring effective teams together, and who actively promote younger scientists in particular, either through direct supervision, co-authorship of major papers, or simply creating opportunities for meaningful, purposeful work in an intensely competitive job market,” he said.

Professor Rossjohn is known for his contributions to the understanding the molecular basis underpinning immunity. He has used structural biology to explain pre-T-cell receptor (TCR) self-association in T-cell development, and how the TCR specifically recognises polymorphic Human Leukocyte Antigen (HLA) molecules in the context of viral immunity and aberrant T-cell reactivity. He has unearthed structural mechanisms of HLA polymorphism impacting on drug and food hypersensitivities, as well as Natural Killer cell receptor recognition. He has pioneered our molecular understanding of lipid-based immunity by T cells, revealing that it can differ fundamentally from peptide-mediated adaptive immunity. Recently he has provided a structural basis of how vitamin B metabolites can be presented and recognised by the immune system, revealing a new class of antigen. Collectively, he has published more than 365 papers and mentored numerous researchers towards obtaining higher degrees and nationally competitive fellowships.

This article is based on the announcement made by the Royal Society of Victoria.

Jamie ranked as a 2018 Highly Cited Researcher by Clarivate Analytics