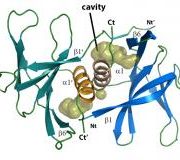 A team of researchers at the ARC Centre of Excellence in Advanced Molecular Imaging at Monash University, using the Australian Synchrotron, have determined the 3D-structure of a SARS-CoV-2 protein at atomic resolution. Determining the shape of a protein is a key step in understanding its function and role in viral replication.

The COVID 19 virus only produces 27 or so proteins, and scientists across the world are currently trying to understand the structure and function of these 27 proteins. Dr Dene Littler, within the laboratory of ARC Laureate Fellow, Professor Jamie Rossjohn from the Biomedicine Discovery Institute, Faculty of Medicine at Monash University, have been examining some of the lesser-understood proteins produced by SARS-CoV-2. One of these, the non-structural protein 9 (Nsp9)  is thought to have a role in RNA replication and the related version of the protein in SARS-CoV is known to be important in viral replication.

This will be part of a broad strategy by the world’s scientists to develop entirely new drugs that are specifically targeted at the coronaviral proteins, blocking its ability to reproduce and infect. Technological developments such as these spurred the first forays into rational drug design, in which scientists study the structure and function of molecules in order to work out what drugs might bind to them—and in the case of viruses, preventing them from replicating.

Professor Rossjohn says that this represents the start of an accelerated program of research within Monash that is aimed at developing new anti-viral treatments as well as understanding how the immune system combats this virus.

Image: The crystal structure of Nsp9

Full publication in bioRxiv or iScience

Calling all MAITs: teaming up to solve the intricacies of the immune system